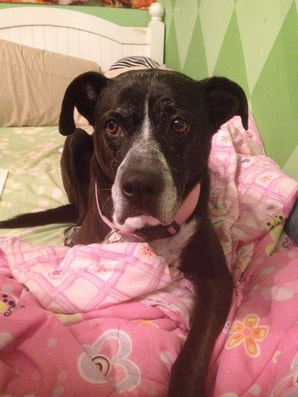 Pictured here was our dog Oreo. When there was thunder and lightning, or if there were fireworks, she would be so nervous and sick that I finally took her to the Vet.

She was prescribed medication to help her stay calm. I put the prescription bottle on the counter by my toaster. Later that night I looked at the bottle and it said "Diazepam" generic for "Valium. It also had 1 refill.

It was then that I realized what I had on my counter..... in plain sight with a daughter who was in recovery! and other children who could easily have taken them. I removed them and hid them.

I later spoke to my Vet and out of curiosity, I asked if she ever had incidents where pet owners abused their pet or just asked for more medication. I was surprised to hear that she has had some tough conversations and has cut people off and/ or reported it.

This is a kind of substance diversion that we don't normally think about. When people are seeking drugs they'll go to any means to get them. Some will actually abuse their pets physically to get pain medication. 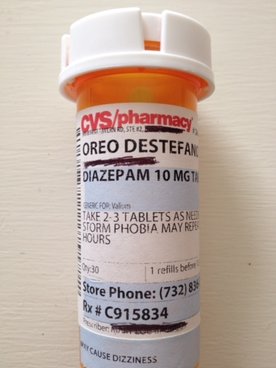 Pictured to the left is the prescription bottle of valium that Oreo was given.

Some Common drugs used for pets that are sometimes abused:

Opioid pain relievers: these medications are generally derived from morphine and can be potent pain relievers. Examples include oxycodone, hydromorphone, butorphanol, meperidine and fentanyl. Most of these drugs are controlled substances because of their addictive potential.

Behavior-modifying drugs and sedatives: these drugs are used to quiet anxious pets or help in reducing anxiety associated with various behavioral issues in pets, prepare pets for anesthesia, and to reduce pet movement during delicate procedures. Examples include diazepam, xylazine, acepromazine and midazolam.


Other Drugs that are used are:
Antibiotics
Non-steroidal anti-inflammatories
Antiparasitics
Hormones and other medications used to treat specific conditions
Chemotherapeutics
Source: www.avma.org/public/PetCare/Pages/YourPetsMedications.aspx

According to AAHA (American Animal Hospital Association) The pet medications market shows no signs of slowing down in the near future. Packaged Facts projected that the market will top $10 billion in 2018, which indicates a compound annual growth rate of 5 percent.
​www.aaha.org/blog/NewStat/post/2014/04/03/335834/Pet-medication-sales-projected-to-hit-$10-billion-by-2018-in-US.aspx